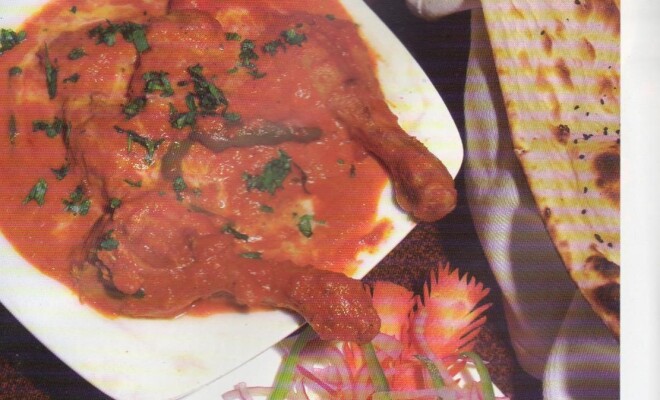 Moti Mahal Turns 100 this year , where the iconic and most loved dish in the world ” The   butter chicken”  was born.

The legend, The Man, The Punjabi-Pathan – Shri. Kundan Lal Gujral “This is the story of a man who set on a culinary adventure and changed the face of Indian cooking. This is a story of a man and a recipe which internationalised the Indian taste of succulence and spice in its food. A man who turned the plebeian village tandoor for baking into a royal mode for his innovation – “The Tandoori Chicken” and then came the Butter chicken. The result: a revolution in taste, a change in Indian eating habits, and a place on the international gourmet map. This man was Kundan Lal Gujral. The restaurant where he housed his innovations was Moti Mahal-“The Palace of Pearls”. The two became a legendary mix. Kundan Lal not only made Tandoori cuisine popular throughout India but also strengthened the appeal of Indian food in many parts of the world. The Tandoori Chicken has become a draw card for Indian tourism. What more convincing words can be said, as were said by our very own Maulana Azad, former education Minister, who said to Shah of Iran on one of his state visits that, “coming to Delhi without eating at Moti Mahal would be like visiting Agra without seeing Taj Mahal. -(https://en.m.wikipedia.org/wiki/Kundan_Lal_Gujral)

Leslie Brenner, founder Cook without Borders , called me  in April this year, for her story on Butter Chicken (https://cookswithoutborders.com/new-story/2020/4/4/chasing-murgh-makhani-an-obsession-with-discovering-the-real-butter-chicken?rq=butter%20chicken)  which she was doing for her Blog (Cook without borders) .I walked her , enthusiastically  through my  memory  lanes to tell her the story of Motimahal and my Grand Father . It was in  Peshawar(undivided India ) , where Motimahal was established in 1920 (https://www.wsj.com/articles/BL-IRTB-13818) and the two  chicken dishes were born (I often refer it to as tale of 2 chickens) – Tandoori chicken (which I refer to as  Father of Butter chicken) and the Butter Chicken.  There is no guessing, as to who is the Father of Tandoori chicken – its well recorded in culinary history- of course , its Kundan Lal Gujral , who has received several awards from the ministers in the Government  for inventing tandoori Chicken & Butter Chicken and for his contribution to the hospitality industry  ( reference- https://www.bbc.com/urdu/pakistan-45225505).

I started my culinary training under  the  guidance of my legendary Grand Father, who always said cooking is like meditation as   its takes all the stress away (  https://food.ndtv.com/food-drinks/the-history-of-butter-chicken-indian-cuisines-most-loved-curry-1686611) As a curious teenager,I would always question him about his journey and our family history. He once told  me that when he invented the tandoori chicken , it became popular both with Indians and Britishers . However, during those days in absence of any refrigeration tikkas / kebabs would often dry hanging by the tandoor and some times waisted. As goes the old saying, “necessity is the mother of all inventions” he soon thought of making a Princely novel gravy  with tomatoes and butter glazed with cream inorder to make the dry chickens , succulent again, which marked the birth of much fabled Butter chicken.(https://www.csmonitor.com/1988/1005/hfmoti.html)

At the age of 17 , I joined the Motimahal kitchen as an intern under the supervision of my Grandfather , where I started documenting recipes  and archiving all the memorabilia of Motimahal.  After few years , I was motivated to write my first Motimahal official cook book which was published by Roli books in 2005 and was released by Mr Arun Jaitley (Minister of LAw &Justice and Trade &Commerce) .

I wrote my all time favourite Book called On the Butter chicken trail (https://www.amazon.in/Books-Monish-Gujral/srh=n%3A976389031%2Cp_27%3AMonish+Gujral)   in 2008 , which was published by Penguin and won the best of best cook books in the world awarded by Gourmand World Cook book fair in 2009 in Frankfurt  . Butter chicken trail celebrated motimahal`s invention the Butter Chicken which  can easily can be labeled as the world`s favourite dish  and its culinary journey.

During the course of several calls and emails , we together came up with a novel idea came to claim a day in October as the “World Butter Chicken Day”

Here is my recipe for all the Butter chicken fans across the globe .follow the link below-

Leslie Brenner researched a little and found out that how the food holidays get created.She  informed  me that someone just claims them or creates them – sometimes they catch the attention of the public or sometimes they don`t   .So here we go ,lets claim 20th October 2020 as the “World Butter Chicken Day “and hope & wish that  it catches the attention of the world culinary enthusiast and food  bloggers to help us create a World Butter Chicken Day

In  Leslie Brenner words “Butter Chicken may well be the most popular Indian dish in the universe. It’s certainly one of the most approachable for diners unfamiliar with Indian cuisine, and as a universally beloved comfort dish that’s aromatically transporting, it would seem to be a COVID-era superstar”.